Mr. Manjunath Bhandary, Chairman said that it is a great achievement in Karnataka. So far, after the SSLC board has been formed, no one scored cent percent till today. He stated that anyone can become doctors and engineers, when proper guidance and advice is given. He requested Prof K Byrappa to advice the topper, so that he can be a national asset. Students are the ones who build brand image. He insisted students to take the right career decision. He said that Ranjan should become a role model to India.

B. S. Ranjan shared his opinion and his future aim in life. He said that everyone must cope up with competition and his own efforts . Life is just like a road hump and we must know to balance everything. He advised students not to be stressed when they fail. His goal in life is to become an IAS officer or MBBS, that is how he can serve the nation and his parents. He also added that he wants to stand on his own and needs outside exposure.

Mr. Ramesh, Syndicate Member, Kuvempu University said that he has become the hero of Karnataka through his achievement. He is a role model for students. He wished all the best for his future. He also added that he has to do well in his future. He praised our institution, and innovative ideas of our Chairman.

Prof. K Byrappa, Vice Chancellor, Mangalore University, gave his presidential speech. It’s a great achievement since it is impossible to obtain full marks. Students have gift of grasping subjects which makes them to achieve good marks. This made history. To succeed in life one should have a goal and work hard to achieve it. Teacher’s play a very important role in moulding students. He told faculties to motivate students to think creatively and also added that students should have curiosity to learn new things.

Principal Dr. U M Bhushi proposed the vote of thanks. He said Vice chancellor has delivered significant message to B S Ranjan. He said that this will take him to greater heights. He advised him not to lose interest in enjoying education, happiness, at the cost of marks.

The Sahyadri Summer Camp was inaugurated at Meremajal Mandal Panchayat by the participating children. Mrs.Vrinda, Ex-President and Mr. Francis Mendonsa member, Mandal Panchayat, Meremajal, Dr. C. K. Manjunath, Administrator and Mrs. Shreelatha U A, AAO, Sahyadri College of Engineering & Management participated in the inaugural programme and wished them best of luck and requested the students to make the best use of it. Students and faculty members of Sahyadri are engaging children with group games, crafts, dance, and other activities. Around 25 children from the 4 local schools are participating. 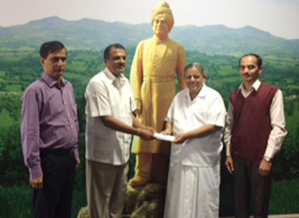 Mr. Manjunath Bhandary, Chairman and Dr. U.M. Bhushi, Principal along with Mr. Karthik Bhandary from the Department of Business Administration visited the Yoga University at Bengaluru and made a humble contribution of Rupees Two lakhs to the 21st International Conference on Frontiers in Yoga Research and Its Applications - 21st NCOFYRA from the Sahyadri Corpus fund. Many of our faculties will be involved as volunteers in the conference to be held from 3to7 January, 2016 at Prashanti Kutiram, Bengaluru.

The Vivekananda Yoga Anusandhana Samsthana (VYASA), Bangalore, the Centre of Excellence for Yoga and Yoga Research is organizing the said conference which shall be an ideal platform for exchange of knowledge including technology, thus enabling in achieving a new mile stone in the area of Integrated Health Care System. The Conference makes the beginning of a new era in Integrated Health System, which aims at making healthcare affordable to one and all. The Conference is a galaxy of diversified personalities participating in it.

Lions and Lioness Club International, Bantwal, Sahyadri College of Engineering & Management and KMC Blood Bank, jointly organised “Amma” a blood donation camp and other social activities at Birva Center, Melkar, Panemangalore. His Holiness Manila Sridhama Mohandas Paramahamsa Swamijee inaugurated the programme. His Holiness said that there is no label for blood, air and water. It is present in each one of us and we use air and water without any discrimination of caste and religion. Sri Jagannath Chowta, Trustee, Bhandary Foundation was one of the Guests of Honour.

Sahyadri donated basic essentials for living to five poor families and clothes to three poor club adopted students of PUC, standard ten and eight. Donations from Sahyadri were handed over to the poor by the Guest of Honour, Sri Jagannath Chowta and student representative Miss Nishmitha Shetty. Around 192 blood donations from the public were recorded. B. Raghavendra Prabhu, faculty member and first year MBA students volunteered and coordinated the programme.

Ms. Rashmi Parvathi, seventeen-year-old scientist of the district, studying at Vivekananda P.U. College, Puttur, was selected to attend the International Convention in the United States of America held in May 2013. She presented her project on Agricultural Research at Houston. Dr. Manjunath Bhandary, Chairman, Bhandary Foundation, felicitated her and presented a cheque for Rs.1.5 Lakh from the Corpus Fund through Mr. Abhishek Goyal, IPS, Superintendent of Police, Dakshina Kannada District, in order to meet travel expenses. She received a gold medal for her research studies at the International Convention at USA.

Rs. 1.00 lakh contributed to Alpha Flying Club is to provide a platform to showcase the skill set and innovative mind of students and to promote and nurture the knowledge acquisition of all phases of aircraft design and development, by initiating, supporting and participating in projects.

Ms. Josny Jesma Tellis, from Shimoga has been sponsored by Sahyadri College Corpus Fund for her MBBS. She is differently-abled and Scored 85% in her Pre- University Examination.

Dr. Bhushi along with students and staff donated blood enthusiastically which was highly appreciated by the Chief Guest.

Under corporate social responsibility an amount of Rs. 25,000/- from the Sahyadri Corpus Fund has been handed over to Master Akhil R. M., student of Std. VIII, Lourdes Central School, Bejai, Mangalore, to participate in the World School Chess Championships 2013 at Porto Carras, Halkidiki, Greece, from the 6 to 15 May, 2013.